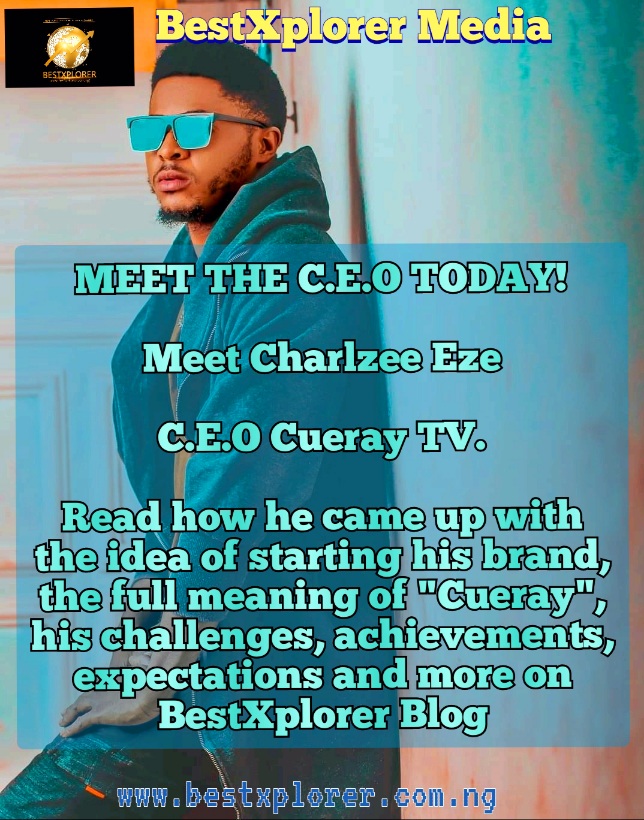 To our humble readers and Bestxplorians. Today on “MEET THE C.E.O”. Please meet Charlzee Eze the young and vibrant CEO of Cueray TV.

He is a video director, Artiste manager, contents creator among others. He has worked with some of the top comedians and Nollywood stars in the country.

He has shared with us on how he comes up with his brand, the aims, his challenges and his dreams on expanding the brand and lots more.

Read His Words Below…

Life has actually thought me alot of lessons. Back then in secondary school, I find myself having good imagination but all were fictions. So with time I started writing short stories and as time passed I was already writing movie scripts.

By 2009, I was already looking for producers who could buy my scripts. But because I was in Nasarawa State and at that time, I couldn’t find any producer or director. I almost gave, but decided to take my search via Facebook back then in 2010.

Our of desperation to show the world what could do. I fell in the hands of some popular directors who collected my scripts and didn’t pay me thereafter.

By 2015 I was at home when I recieved a call from a Ghanian director who came for a shoot in Lagos. He said he read one of my synopsis on my Facebook profile, because I usually write movie script and post the synopsis on my profile for potential future buyers.

The next day I had to use the available night bus to Lagos.

Over time I decided to learn Directing, cinematography and video editing with 3 years.

I was discussing with one of my friend – Raymond back then in Lagos that I would want to start my own production. He opted to join me, so we decided to name the production name CUERAY TV (CHARLES UGOCHUKWU EZE RAYMOND TV).

I wanted to bridge the gap and help other writer in my locality. Because I knew the pains I passed through looking for a production house to work with.

A year later, Raymond pulled out and decided to go his way cos everything about Cueray was just a vision.

When he left and had in my mind converted the RAY as ray of light SINCE it’s a vision that must be accomplished.

By later 2017, I return and after all the set backs I was able to shoot my first film LATER LETTER.

This year I will be releasing another movie DIARY OF NOAH on our online TV and other cable TV’s.

Over time, I have learnt that you need people of likemind to grow and consistency is the driving force in the industry.

I hope in the nearest future, my dream of having my own cable tv (CUERAY TV) will be actualized.

My not lucky to some extent when it comes to education. Passing Jamb countless times and being denied admission. I wished you know the pain knowing you gained NCE (BIOLOGY/CHEMISTRY) with university cut off mark 199/200.
And currently running a degree program (BOTANY) at federal university Lafia, and would be rounding up by 2023.

RECOMMENDED:  MEET THE CEO OF VME USMAN AKA FREENITY

Stay with us reader as we bring another guest soon. You could also be the next!!!