In the last 48 hours, things have taken a strange turn in the R.Kelly case. Up until yesterday, the singer was silent on the accusations that have been made against him. On Wednesday morning, he decided to speak up, talking with Gayle King and telling his side of the story.
His plea was very emotional and confusing with the man crying, screaming and firmly arguing that he’s innocent. In a follow-up interview, Kelly’s alleged girlfriends; Joycelyn Savage and Azriel Clary, spoke with Gayle King, defending the singer every step of the way. 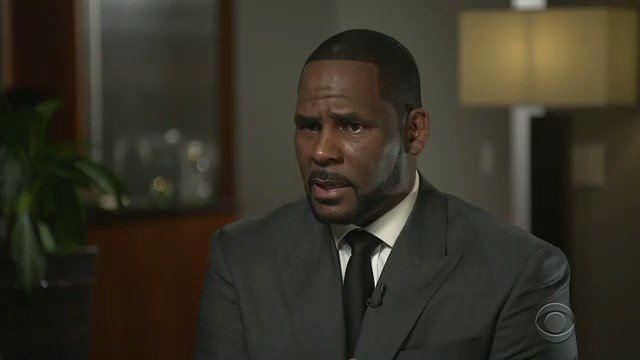 “I’ve known Robert for 4 to 5 years. What they’re saying is absolutely not true. He’s a good man, he’s a gentleman.” — Joycelynhttp://CBSNews.com/RKelly

85 people are talking about this
Twitter Ads info and privacy
During their joint conversation with King, Azriel Clary was incredibly vocal about all that has happened in the last few years, alleging that her parents are simply looking to “scam” R. Kelly in an attempt to ruin his career. Joycelyn and Azriel both claimed to be in a consensual relationship with R.Kellly, when King asked them, “What is your relationship, both of you, with R. Kelly?”
“We’re with him, that’s our relationship,” Clary aggressively replied. “We live with him, and we’re in a relationship with him, you just said it.” Joycelyn added that their bond is “very strong.”
King uncomfortably asked about the sexual nature of their relationship, to which Clary responded that she’s not there to discuss her personal life. “Sexually, well, first of all, I’m not here to talk about my personal life, and I would never share with no one what I do in or outside of the bedroom. And as a woman, I’m sure you would not either,” Clary replied.
Clary went on to discuss how her parents initially encouraged and fostered her relationship with Kelly.
“Okay, so when I first met Robert, my parents told me to lie about my age,” said Clary, while Savage nodded her head in agreement. “So when I met him, he thought that I was 18. On top of that, when I was 17, my parents were actually making me, trying to get me to take photos with him, take sexual videos with him, all kinds of stuff.”
Clary continued that the reason her parents asked her to take “sexual videos” with Kelly was in order to blackmail him in the future. “Because if they ever have to blackmail him, what they’re trying to do now, they can use it against him, which is exactly what they’re doing,” she said.
As we first saw in the preview clips yesterday, the interview ends with Clary bursting into tears claiming that “this is all f***ing lies for money, and if you can’t see that, you’re ignorant and you’re stupid.”
While discussing this new interview with her CBS This Morning colleagues, King goes on to reveal that Kelly was actually hovering behind the girls throughout the interview, coughing loudly so it was clear the two women knew he was in the room — despite previously saying he would not be present for their interview. King also concludes, aptly, that the two girls were basically mimicking Kelly’s version of events.

RECOMMENDED:  Amazing! Davido has again dashed out 1 million Naira to a fan

BestXplorer Online Store: Sale Your Music Or Products And Keep 100% Of Your Sales

‘We’ve Only Received One Application’: NAFDAC Reacts To Claims Of Herbal...

El-RUFAI 3 MONTHS PLANS TO RELOCATE TO SOUTHERN KADUNA SO AS...

In view of the ongoing battle with the second wave of global pandemic (Coronavirus), the Kaduna State government through the state's ministry of health has...
Read more

Viral video of "ONE DAY" by Mac Fabulawz. Buy and download for only N100 One Day is a motivational song that is inspiring and encouraging everyone...
Read more

Nigerians are pained about how some men in uniform abuse their power on the people they were meant to protect. It was one of...
Read more