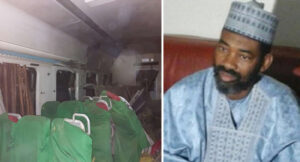 The train conveying hundreds of passengers from Abuja to Kaduna was attacked by gunmen suspected to be bandits between Katari and Rijana in Kaduna State.

An aide to the former Deputy Governor told Channels Television that Mr Wakkala who was returning from the APC National Convention which held on Saturday was shot during the cross fire between the terrorists and the military and has been moved to a military hospital in Kaduna for treatment.

The spokesperson of the All Progressives Congress (APC) in Zamfara State, Yusuf Idris also confirmed the incident to Channels Television.

“He was initially abducted but was rescued by the DSS and military, it was during the process he sustain gunshot injury in the leg.”

“He is very okay now, he is receiving treatment at the hospital in Kaduna state.” Idris added