Nigeria has recorded 176 new cases of the COVID-19, bringing the total number of infections in the country to 5,621.

Also, eight each are in Niger and Borno states, six in Jigawa, four in Kaduna, three in Anambra, two each in Edo, Rivers, Nasarawa and Bauchi and one each in Benue and Zamfara. 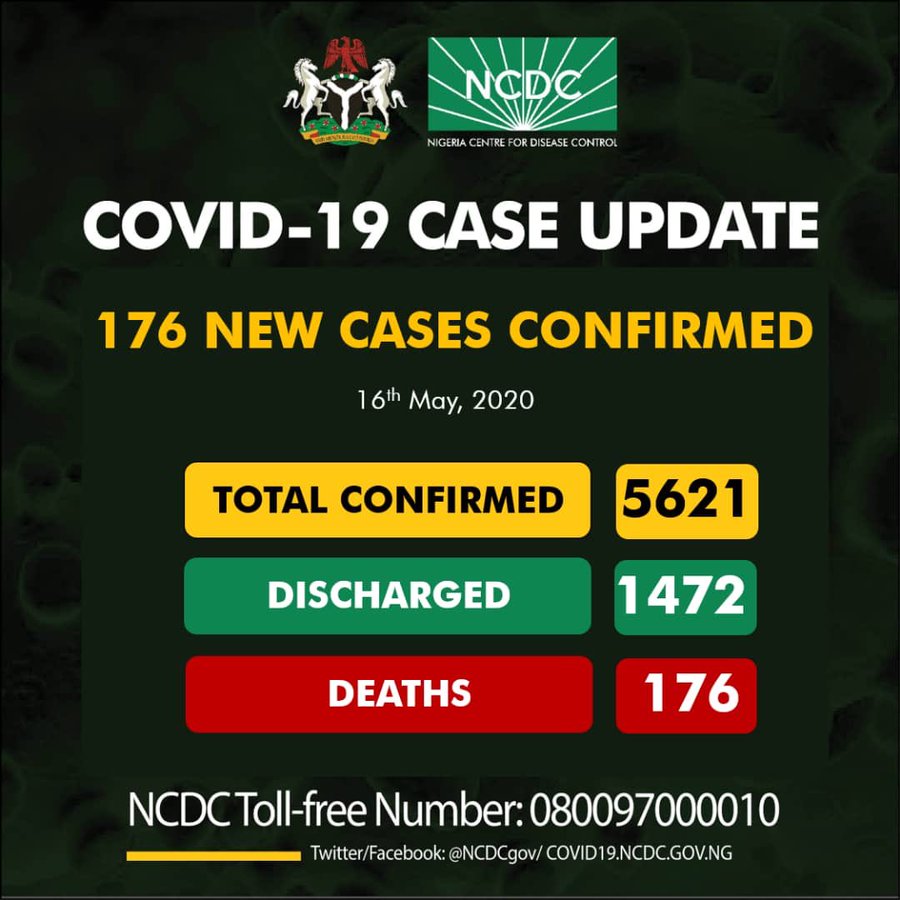 The agency also noted that the number of recovered cases had jumped from 1,320 on Friday to 1,472, while the death toll increased by five, to 176.

Here’s a full break down of the total number of cases by state.

Since the novel coronavirus first emerged in China last December, it has killed at least 304,619 people worldwide, according to a tally from official sources compiled by AFP at 1900 GMT on Friday.

The tallies, using data collected by AFP from national authorities and information from the World Health Organization (WHO), probably reflect only a fraction of the actual number of infections as many countries are testing only the most serious cases.

Meanwhile, as the world continues to battle the pandemic, and health experts make frantic efforts to find a solution, some have begun to explore herbal options.

Countries like Madagascar which has officially reported 183 coronavirus infections and 105 recoveries, with no deaths, has come up with a herbal solution.

According to the country’s president, Andry Rajoelina, patients who had recovered, were cured only through the administration of the ‘Covid-Organics’.

He referred to the remedy as “an improved traditional medicine”, adding that Madagascar was not conducting clinical trials but “clinical observations” in accordance with WHO guidelines.

The remedy which is in form of a drink is derived from artemisia — a plant with proven anti-malarial properties — and other indigenous herbs.

According to Rajoelina, it cures patients within 10 days of being taken.

Already Equatorial Guinea, Guinea-Bissau, Niger and Tanzania have taken delivery of consignments of the potion, which was launched last month.

Nigeria, on the other hand, also received samples of the remedy on Saturday.

The Senior Special Assistant to the President on Media and Publicity, Garba Shehu, who confirmed this in a series of tweets, noted that the samples were brought by the President of Guinea Bissau, Umaro Embalo, who met with President Muhammadu Buhari at the State House.

However, according to Garba, President Buhari reiterated that all necessary procedures will be put in place before allowing traditional or any new medicines to be administered on Nigerians.

“We have our institutions, systems and processes in the country. Any such formulations should be sent to them for verification. I will not put it to use without the endorsement of our institutions,” the president was quoted to have said

POEM: He Forced Me – by Enoch Israel ( King Sniffy) A Poem Against Rape Selected By Africa Center For Leadership And Development

WHO Resumes Use Of Hydroxychloroquine In Fight Against COVID-19, PTF Affirms

Lucky Man Faints After Receiving N10m Cheque He Won In A...

POEM: He Forced Me – by Enoch Israel ( King Sniffy) A Poem Against Rape Selected By Africa Center For Leadership And Development

I am honoured to be selected by Africa Center for Leadership & Development (ACLD) to write a poem against rape and sexual abuse, which...
Read more

Shekx (The Vibe Machine) whose real name is Gimba Shekwolo Emmanuel is a singer, songwriter, part time producer and a rapper. He used to...
Read more

OAP with rockside fm Paul Timothy also known as Little. P charge the people of Dangwa to embrace peace and make it a priority,...
Read more

Terry Madaki, popularly known as Terry tha Rapman (but now prefers T.R) is a veteran and Legendary Nigerian rapper who rose to fame after...
Read more