The Bible says the heart of man is desperately wicked. Who could ever imagine that a familiar face had a hand in the gruesome murder of the wife of Kaduna based doctor, Philip Ataga who was kidnapped and later killed.

It has emerged that one of kidnappers who abducted and later killed the wife of Philip Ataga was a close neighbor who works with the Nigeria police.

It could be recalled that the late doctor’s wife and their kids were abducted few weeks ago, but the children regained their freedom after a ransom was paid. The kidnappers also reported collected huge ransom for the wife but she was killed and her body dumped on the road side.

The police man was said to be the one who ordered the killing. The revelations came after he visited the doctor to pay him a condolence visit. In the process, one of the doctors kids recognized him.

A Facebook user Grace Ibrahim Kogi shared the update on her profile. 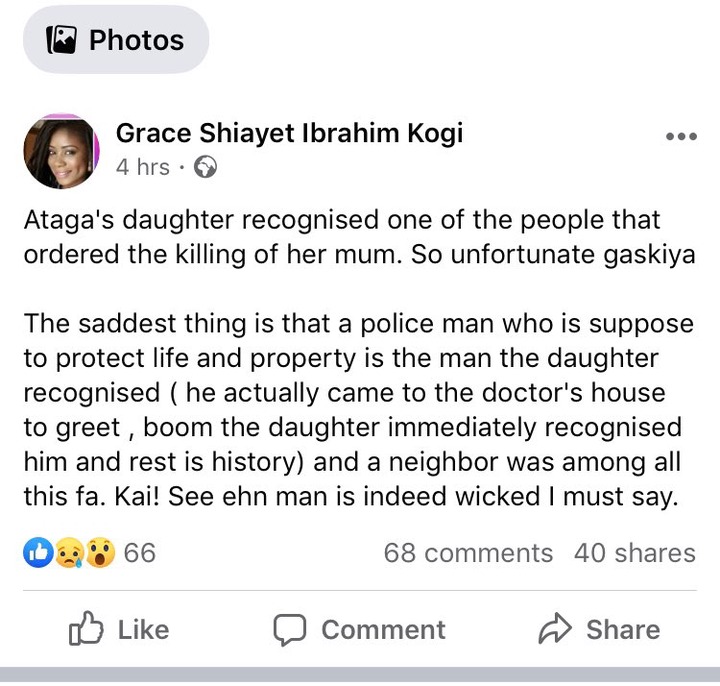 “Ataga’s daughter recognised one of the people that ordered the killing of her mum. So unfortunate gaskiya

The saddest thing is that a police man who is suppose to protect life and property is the man the daughter recognised ( he actually came to the doctor’s house to greet , boom the daughter immediately recognised him and rest is history)

We’ve resolved our problems we’re sorry, we seek for your forgiveness...

Below are the Hit songs and event to  anticipate from these multi talents Nasarawa base artistes. 1. Gbuncho is fully ready with a come back...
Read more