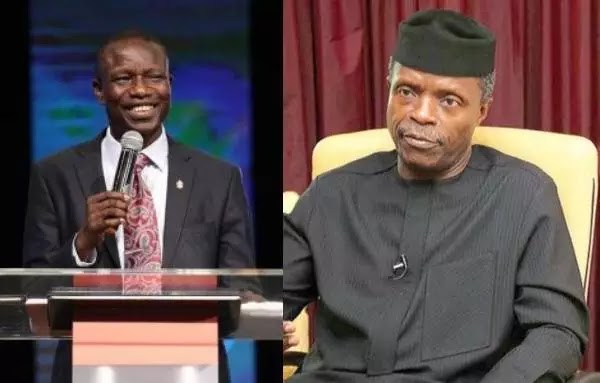 Bishop Wale Oke who is the founder and Presiding Bishop of the Sword of the Spirit Ministries, Ibadan, has debunked claims of Vice President Yemi Osinbajo being corrupt.
Commenting on the alleged N90bn illegal funding the Vice President received for the All Progressives Congress (APC) Presidential campaign while receiving the Nigeria Association of Women Journalists led by Jadesola Ajibola at his church in the Agodi area of Ibadan, Bishop Wale Oke stated that Osinabjo is loyal to a fault and he has informed Christian leaders that some cabals were behind the allegation.

He said, “The VP did not only deny involving himself in any sleaze, but used the opportunity to  inform us that some cabals were behind the allegations.
“The VP is always reaching out to Christian leaders on the need to support Buhari. Osinbajo is loyal to a fault.
“So, those plotting his downfall through orchestrated campaigns should fear God. This man is not corrupt. He has been a friend for many years,” he added.

ADDRESS TO THE NATION BY MUHAMMADU BUHARI ON THE ENDSARS PROTESTS, 22ND OCTOBER, 2020

We request equity for Nigerian consumed to death in Libya, says Dabiri-Erewa

BIG BROTHER NAIJA: Every Time I See Cee-C I See A...

[PHOTOS] Governor El-Rufai & His Course Mates At A University In...

Meet Alaba BE and know his biography

Meet Bello Ephraim Ovye better known by his stage name, ALABA BE. The Nasarawa base talented act was born Born On 27th February, 2002 To...
Read more

One of Nigeria's most talented and fast rising star "Lahmar" has decided to lend a voice to the ongoing #Endsars, #EndBadGovernment protest with this...
Read more

Meet Alaba BE and know his biography