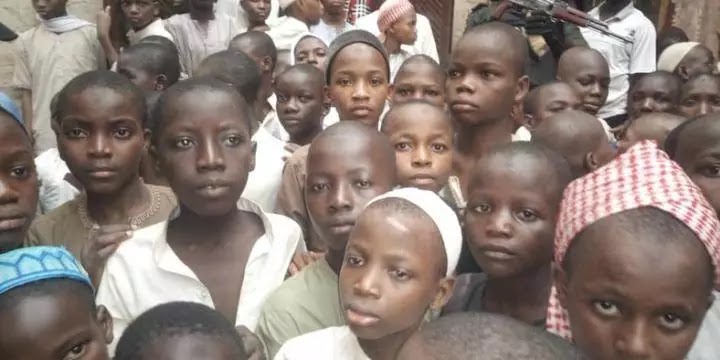 The parents said they wonder why the police raided the Islamic centre because there is nothing wrong with the school.
Some parents of over 300 boys and men rescued from an Islamic School, where they were allegedly tortured and sexually harassed have protested against the raid of the school by the police.
On Thursday, September 26, 2019, police operatives in Kaduna raided an Islamic school known as “Imam Ahmad Bun Hambal Centre for Islamic studies” in the Rigasa area of the state.

Police recently freed 300 boys and men from an Islamic School, where they were allegedly tortured and sexually harassed. (Punch)

In the school, police found over 300 children and men, some of whom were in chains, while others were reportedly hung upside down from the ceiling.
According to the police, some of the children rescued from the centre said the authorities of the school starved and sexually abused them.
Police also alleged that the children were forced to recite the Qur’an everyday with torture.
However, some parents of the boys have protested against the raid of the Islamic school, saying the allegation by the police that the school management sexually abused the boys was not true.
The parents, mostly mothers declared their support for the school and its alleged harsh treatment of their children. They wonder why the police raided the school, arguing that nothing was wrong with it.
One of the mothers, Maryam Fatika, whose four children attend the school said there was nothing wrong with the Islamic centre. She added that none of her children had ever complained of any form of maltreatment.
The hostages were chained and prevented from leaving the centre in Kaduna [TVC]
The hostages were chained and prevented from leaving the centre in Kaduna [TVC]
She said, “We are aware that they (children) are being punished whenever they do wrong because they are dangerous and stubborn children.
“There is nothing wrong with the school because we took our children there by ourselves. So, we don’t know why the police raided the place.”
Another mother, Mama Jibril, who spoke to Punch said they don’t know why the police raided the Islamic school because they didn’t see anything wrong with the school.
Jibril added that she enrolled her son in the school because he was becoming a threat to the family.
She said, “We took him to the Islamiyya school for rehabilitation and to God be the glory, he has changed.
“I visited him and I have never seen anything wrong going on in the school.
“We don’t even know where they (police) took our children. We are appealing to the government and police to return our children to us and we are also okay with the way the children are being handled by the Islamiyya authorities.”
Shafa’atu Zakari, another mother, who has six children in the school also supported the claim that nothing is wrong with the Quranic centre, saying she took her children to the school for rehabilitation because they were drug addicts.
She said, “We took the children to the school because we didn’t know what to do with them. Presently, four of my children are among the students taken away by the police.
“We demand their release because the founder of the school, Mallam Ismail, is doing everything possible within Islamic teachings to rehabilitate them for us.”
Ahmed Balarabe, a man, who has a son in the centre and also lives around the school denied the claim that the children were being sexually abused.

“I share a fence with the school and my two sons attended the school and they never told me anything about being sexually abused.
“Being a neighbour that always enters the school, if such thing was happening, I should have known,” he said.
However, while raiding the school on Thursday, police arrested seven teachers of the Islamic centre, including its proprietor, Mallam Ismaila Abubakar.
Abubakar said all the allegations of torture, dehumanisation and homosexuality against the authorities of the school are false, saying “We do nothing here other than teaching people Islam.”

BIG BROTHER NAIJA: Every Time I See Cee-C I See A...

“My Country, 6-Gates Behind: A Prison Memoir”. >>> Luka Binniyat Experience...

Ride-hailing company, Bolt has announced the launch of its e-hailing service in Ado-Ekiti and Bauchi states as it continues to expand across Nigeria. The...
Read more

RECOMMENDED:  Security officer in London called on the arrest of Guardian reporter as he went to Abuja House in London to see & interview Buhari. Read more...

Bolt Launches Ride-hailing Service in Ado-Ekiti and Bauchi, Now in 14...