You would recall that we brought you news of Davido’s Eko Atlantic Concert venue disapproval in the very early hours of this morning. In the news, Davido reported that his concert, scheduled to hold on the 27th of December, 2018 at the exquisite city of the Eko Atlantic was not approved because of his political partisanship. He however said that he is looking for another venue that will soon be announced.
Well, the management of the Eko Atlantic City has quickly come out to respond to the allegation through a press release to debunk the rumours spread by the music superstar that the reason for the disapproval is politically motivated.
Davido shared a soft copy of the press release from the management via his twitter page.

Just to clarify the @iam_Davido situation …….. 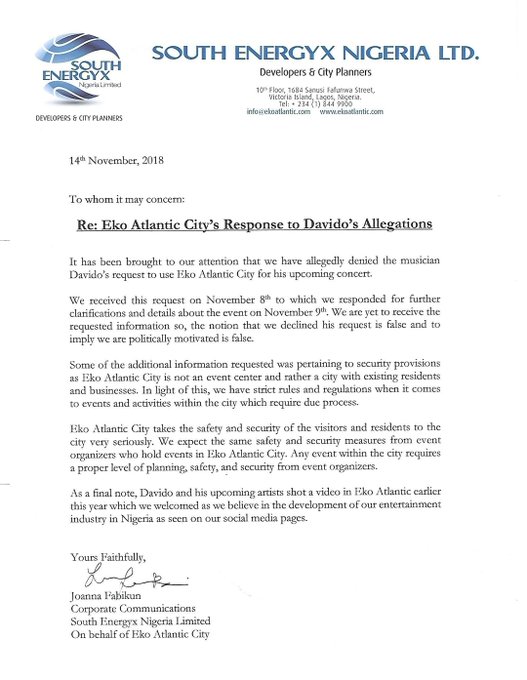 721 people are talking about this

Do you really think the venue could have been disapproved for political reasons and regarding the last paragraph on the press release “Davido and his upcoming artistes” who are they calling Davido’s Upcoming artist; Mayorkun, Dremo, Peruzzi?

INCREDIBLE! 40 Years After, Lost Recordings Of Bob Marley Found In...

A veteran Nollywood actor, Chief Bruno Iwuoha, has passed on. According to his daughter, the actor died around 2am of on Saturday at the National...
Read more

Brilliant and talented but unsigned Kaduna base artiste, Kato L has surfaces with breathtaking song titled; "Blessings". The young and smart act is no doubt...
Read more

Young Nasarawa base act, Marq G has surfaces with breathtaking song that will amaze and thrill you. "Life Na Rotate" is a song written and...
Read more